HgCapital works with Danish IT expert on Nordic acquisitions 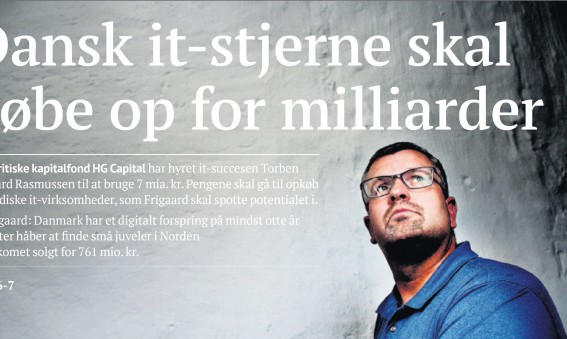 The U.K.-based private equity investor HgCapital has hired a successful Danish businessman, the IT expert Torben Frigaard Rasmussen, to provide advice in regards to a potential investment of €1 billion in Nordic opportunities.

HgCapital, a private equity firm with funds of more than €1 billion (approximately 7.5 billion Danish kroners), is looking increasingly towards companies in the Nordic region of Europe.

Last year the London-based firm purchased the Danish IT company e-conomic and reinvested in the multi-billion-euro Norwegian software company, Visma. This has given the firm an appetite for more.

"Denmark and the Nordic region have a much higher degree of digitalisation than most", Rasmussen said. "This has given us a great competitive advantage in regard to the huge incoming technological wave rolling towards the EU and the United States, where everyone wants to make it easier for small and medium-sized enterprises to run their businesses. We're at least eight years ahead".

Torben, formerly a manager at e-conomic, was recently appointed to identify companies for investment by HgCapital. As he told AVISEN, "I have worked for 15 years in IT and the world of online business, so it will be very exciting to put my network to use this way. I have an office with a desk right by Tower Bridge, and I will be working from there a few times per month".

Mr. Rasmussen has personally led several IT companies through successful divestitures. He has generated particular attention outside the Nordic countries with the sale of the French-listed Retail Internet to Come & Stay in 2006, and again with last year's 761 million kroner sale of e-conomic to HgCapital. The success in each of those cases stemmed from the companies being deeply internationalised.

HgCapital has two funds with a total of €1 billion allocated for acquisitions of technology, business services and industrial companies. A common element for these companies will be IT as the focal point of their products. They also have funds specifically for investment in renewable energy.

"We've got the benefit because we've invested consistently in the Nordic region for almost ten years", said Nic Humphries, Managing Partner at HgCapital. "We've also built a strong network of people like Torben, and they have asked us to spend more time digging deeper and finding more good businesses". Humphries emphasized that the early spread of broadband and high-speed mobile networks has given Nordic countries a head start.

"Nordic populations came online earlier, and that has created new business models which, at their heart, help to automate tedious work processes. This has created a breeding ground for a lot of growth opportunities which you will not find in other countries where there's been less investment in these areas over the past 10 or 20 years."

Humphries expects to find small gems among Nordic businesses, which other capital funds will not see. The key is an international approach, which is unique to smaller markets such as the Nordics.

"The Nordic home markets are well-developed, but they're too small for the establishment of large companies. This forces Nordic companies to think, very early in the process, about how they want to internationalise their products", Humphries said.

Consequently, HgCapital are looking at companies with 100 to 300 employees and which have established or are planning to branch out to one or more other countries. These will be companies which have already taken the most important step towards international growth.

Research by the DVCA (Danish Venture Capital and Private Equity Association) has revealed that several foreign funds are interested in Denmark. Moreover, it is not unusual to find situations in which a Danish outpost provides assistance in the search for strong investments.

"If HgCapital plans to invest €1 billion in the Nordic region over the coming years, it will of course be important for their team to have an employee with the general technical qualifications needed to understand the companies they're considering", said CEO Jannick Nytoft, of the DVCA.

Rasmussen has stated that he already has several companies in sight and expects to present two or three prospects to his managers in London before the end of the year.

IT Comet Sold for 761 Million

The ability to upscale a company from the Danish little league to an international player has benefited several of the companies which businessman Torben Frigaard Rasmussen was a part of.

Last year, one of them - e-conomic, a pioneer in online accounting - was sold to HgCapital with little fanfare or media attention. Subsequently, it became clear, from the accounts of HgCapital's Danish holding company, Farlax Bidco ApS, that the fund made a cash payment of 761 million Danish kroners for the company, which, in the previous year, had a turnover of just 66 million Danish kroners and recorded a deficit.

"We are trying to identify sectors that will grow over the long term," HgCapital's Managing Partner Humphries explained. "Online accounting is a good example, and we have tracked companies in the industry for six to seven years". He added that the firm was convinced of e-conomic’s ability to disseminate its accounting system to many countries.

HgCapital has, since then, given e-conomic room for further expansion, and this year the company expects a turnover of 150 million Danish kroners. The senior management group has also been expanded, and e-conomic now has 200 employees located at the former Danisco headquarters on Langebrogade, in Copenhagen.

Even though HgCapital invests in a variety of sectors, in the Nordic countries there will be an emphasis on small but very international IT companies. Rasmussen believes the Danish IT industry is struggling to gain adequate attention from Danish investors, which is the reason so many companies end up in foreign hands at prices the Danes find utterly amazing.

Rasmussen mentioned, as an example, the IT champion Zendesk, which provides systems for customer support and ended up as a listed company in the United States. Only then was it discovered by the Danish venture environment; or Tradeshift, who facilitate electronic invoicing between companies and has raised triple-digit millions in foreign capital; or Podio, who developed a social collaboration tool on the web and were suddenly sold to the American IT giant Citrix.

The sale of e-conomic primarily benefitted the two founders, Jacob Wandt and Anders Bjørnsbo. Judging by the accounts, the sale also brought Mr. Rasmussen a profit in the double-digit millions. Rasmussen, however, has declined any opportunity to comment.

The old days were a time in which every household regularly received, by postal mail, small, oblong coupon catalogues with which to order powdered weight-loss supplements or newspaper subscriptions. Such days are now gone, and it was people like Torben Frigaard Rasmussen who put an end to the practice.

Rasmussen, in 2001, was placed at Lars Kolind's company, Retail Internet, a pioneer in permission marketing where consumers agree to receive newsletters via email and text message. Advertisers loved the fact that they now could measure the precise effects of marketing, and soon coupon catalogues were "deceased".

Retail Internet was sold to the listed French company Come & Stay in 2006, and this event taught the previously outspoken Mr. Rasmussen something about discretion and stock exchange rules. Later, he was headhunted as chairman of the start-up software company e-conomic. He soon took over the role of CEO and began the internationalisation of the firm, which eventually bore fruit.

e-conomic sells a cloud-based accounting system, in which all data is located on central servers but not with the individual customer. Auditors recommend the use of the system to their clients, and this has been an effective sales channel. Today, e-conomic has more than 200,000 users worldwide and, this year, a turnover of 150 million Danish kroners is expected.

Last year e-conomic was sold for an impressive 761 million Danish kroners to the private equity investor HgCapital. Concurrently, the company secured Rasmussen as its consultant for new acquisitions in the Nordic region.

Even though Rasmussen made a fortune on the trade, he doesn't mind making the trip from his home in Odense to London a couple of times each month, bringing with him suggestions for companies worthy of consideration by the U.K. firm.

"I've made an agreement that, if something is of no interest to HgCapital, I'm allowed to invest myself and take a seat on the board of directors", he said.